Don’t have power running to your dock? No problem! Even without a conventional 110v outlet, you can still light up your dock to make it safer and more enjoyable. Having a lit dock will ensure it is seen at night by any boaters or passersby. It will also help you and your family stay safe while spending time by the water.

Many dock owners know that piling caps are one of the many protective accessories used to further the life of your dock. But unfortunately, many of the piling caps on the market are just simply made plastic. They only last for maybe a year, then you’ll have to go back and buy more. They not only have limited longevity, many of them are not exactly pleasing to look at.

Well, the Solar Piling Cap fixes all those issues. All components of the Solar Piling Cap are made in the USA. They are constructed with premium plastic polymers, ensuring they will last as long as your dock is still standing. Because they are solar powered, they automatically operate from dusk to dawn. They install in less than 5 minutes, and will look beautiful for years. How could you say no to an awesome product like this?

Parking your boat on your lift at night can be a nerve-racking, and frustrating at times. Whether you’re tired from a long day in the sun, or distracted from all family and friends on the boat with you. Sometimes, we wish we had an air-traffic controller standing on the end of the boat lift to calmly guide us in.

Well, that’s not really as crazy as it sounds. The Guide Post Lights mount onto the PVC posts on your boat lift. Just simply slide these little guys into your guide posts and wait for nightfall! All components of these solar products are also built in the USA and will last for many years to come. These little lights will ensure that your boat is safe and centered every time you bring it in.

These Dock Blocks are a great way to light pathway and edges of your dock. If you like enjoying your time on the dock at night, you know how easy it might be to step right off the edge in the dark. Since they automatically come on from dusk to dawn, you don’t have to worry about remembering to turn them on before you go down to the dock.

These Dock Blocks come in three different colors, and install in less than 5 minutes. Simply place it in the desired location, and secure it to the dock using 2 screws and drill. All that’s left to do is enjoy your new pathway lighting! No matter how you install them, your dock will look great and be safer for you and your family to enjoy for years to come.

The DokLamp is designed to fit perfectly on any solid service. Whether it’s a handrail, fence post, or table, the Doklamp will fit perfectly. All DokLamps are manufactured in the USA, from the premium polymers used in the plastic, to the custom designed solar panels.

DokLamps are also wash down quality. Meaning, they can be washed down easily with a hose. This makes them great for things like fish cleaning tables! Rather than outfitting your dock with 110v outlets so you can illuminate tables, you only need to switch these on and wait for sunset.

Similar to the Dock Blocks, Dock Spots are another option for solar pathway lighting on your dock! Rather than a bar, these guys are slightly smaller circles. These guys are also incredibly simple to install. Simply drill a 1 3/8″ hole, and drop the Dock Spots in.

These guys are sturdy and can hold up against getting wet, being stepped on, and enduring the other elemental hazards of saltwater. The Dock Spots come in two colors (blue and white), and will keep you and your family safer while enjoying your dock at night!

The use of submersible or underwater lighting to catch fish in freshwater or saltwater is not a recently developed concept.  However, the idea of equipping one’s boat with underwater lighting is relatively new and due mostly to the recent advancements in LED lighting technology.  Underwater lighting attracts plankton which in turn attracts baitfish to feed on the microscopic creatures. Eventually, the feeding baitfish attract the bigger predator fish where your bait-covered hook or lure are waiting for them.

The Evolvement of Underwater Lighting for Fishing

In the early years of night fishing with light, individuals would hang their lanterns over the sides of their boats.  The idea was that the light would attract insects (which it did and still does) and this would entice the fish to feed.  In fact, there are many individuals who still believe the theory of “fewer bugs means fewer fish.”  Unfortunately, today’s technology has done a great deal in the way of disproving that theory.  The underwater lighting leaves little if any light reflection on the surface of the water to attract insects.

So how do fishermen manage to catch so many fish when there aren’t any insects on the surface to feed on? The answer is simple.  Underwater light starts a natural feeding process by attracting plankton (see above).  Minnows, perch, shad, and other baitfish are attracted to the plankton and then the larger fish move in to feed.  When filming underwater, it’s not uncommon to see baitfish stack up near the lighting while predator fish are stacking up below them.

It’s all about being where the Fish are

While the right equipment and tackle such as baits and lures, fish locators, rods and reels, and underwater lights all play a role in increasing your chances bringing home a limit of fish, they are by no means magic.  This is especially true if you have set up in a spot with little or no fish in the area.  If you want to attract fish with underwater lighting, there has to be fish present.  For instance, if you’ve never caught any fish off of a dock sitting in a couple of feet of water, underwater lights won’t be the magical solution.

The best equipment and tackle will only increase your chances of catching anything provided you’re in an area that is holding fish.  Consequently, if the water doesn’t have enough structure, is too deep, or is too shallow, there is nothing short of a miracle that will help you catch anything.  This is true whether you’re fishing in a boat, on a dock, or even on the ice.  Remember one of the important rules about finding fish.  Fish will always relate to some form of structure and the temperature of the water. 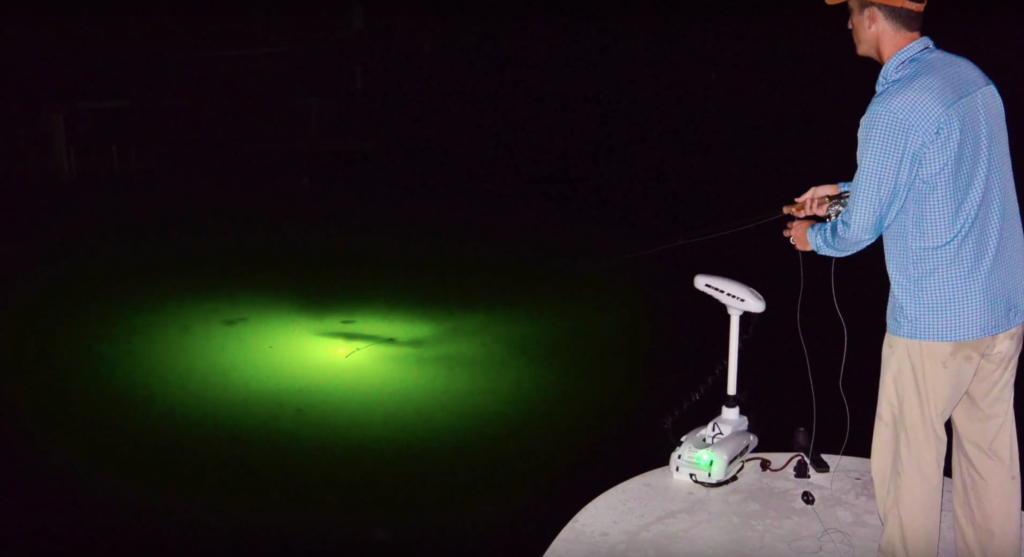 Daytime fishing in fresh or saltwater can be an exhilarating experience, even if you don’t catch anything.  The same holds true for night fishing with one possible exception.  It offers a certain mystique that daytime fishing cannot parallel.  It goes without saying that as a night fishing aficionado, being able to see what you’re doing is essential.  In other words, you’ll need some type of lighting, but not just flashlights or lanterns so you can see what you’re doing.  You should also have something to attract the fish to you such as floating lights or more importantly, the underwater fish-light.

Why submersible or underwater fishing lights?

For many years prior to the development of underwater fishing lights, the most common form of lighting that fishermen used to attract fish was some type of above-the-surface or floating light.  However, there was one major disadvantage or downside to using these types of lights.  They not only attracted fish, they attracted swarms of annoying insects as well.  It was primarily for this reason that the submersible or underwater fish lighting was developed.

The underwater fish-light is placed beneath the surface of the water to light up the water below your boat or fishing dock.  There are several versions of submersible lights that are available including 12-volt, battery powered, fluorescent, and LED models with the most common colors of light being green and white.  Some models sink immediately when placed in the water while others are weighted internally.  Still others sink by using a weighted swivel cup at one end of the light.

Most submersible or underwater fishing lights are available in two colors – green and white.  However, the green underwater fish-light is consistently the most productive for the night fisherman.  Basically, it’s all about reproduction and the food chain.  To put this into perspective, the green light source attracts microscopic creatures known commonly as plankton (zooplankton is the technical name).  These creatures migrate towards the light in order to reproduce.

As the plankton gather to procreate in the light, it attracts smaller baitfish that feed on them.  In turn, while these swarms of baitfish are feeding on the plankton, it attracts the larger fish that you want to catch and make a meal out of.  You can credit that green light for getting the process rolling and helping you catch your limit.  Although you can use white light instead of the green, it is absorbed quicker and doesn’t penetrate as far.  Consequently, it’s less effective than the green underwater fish-light.

Whether you fish from a boat or on a dock, in freshwater or saltwater, you can almost be assured of having a successful night fishing experience and bring home your limit when using underwater fishing lights.